I was praying with some friends in my classroom one day and saw a picture in my mind of a piece of sheet music.  What was on it was captivating. What Papa said about it, moved my heart.

Listen in, and see what He might speak to you.

The Best Song I Never Heard

I’ve uploaded a new short story to my Scribings page and would love for you to check it out! It was a different type of story to write than I’m used to and an interesting journey to do so. I’m actually trying to remember when I got the idea for it this summer. I think it was after talking to my sister on the phone and we had been discussing dreams. I know that much of it fleshed out when I took a walk by myself beside the ocean on a recent trip to Pacifica, California.

I began writing the first part of it weeks ago and then, as usual, the story kind of sat there. I wasn’t quite sure how to finish it and was more interested in some other projects I had going on.

When my roommate shared that she would love for me to read a story at her birthday, I assumed I would simply read the story I wrote for her last year, as I doubted anything would be finished in time to debut. But God had other plans, and when I went to my writing abode (aka coffee shop), the story basically wrote itself. I love when this happens. I just sit back in my imagination and write what I see and hear.

And so, The Dreaming Shore found its finish just in time for Amanda’s birthday. I think it quite liked having its debut in the midst of such celebration.

I was blessed this summer with the opportunity to completely pursue writing. I decided not to look for a job and instead fling myself head first into working on some story projects. I wanted to learn about the publishing business and just take a season to dream about what it might look like to pursue being an author. Wow. That sounds kind of lofty, even when I read it.

Three months of free time, what more could a writer dream of?

Except that for a month and a half, trying to write was like walking through tar and I couldn’t figure out why. I love to write, why was I so unmotivated?

For some unknown reason I became rather obsessed with flowers and gardens this summer. I’ve had the privilege of living and visiting amazing gardens throughout my life, but never thought much of them. They were pretty and all, but they weren’t the intoxicating presence they have since become in the the last month or so. I thought maybe I was pinning for England again and this was just the latest tell-tale sign. So, during times when I surely should have been writing, I’ve instead been researching and plotting how to start my own little British garden beside our house. With many hours in the blazing sun and a pretty penny’s worth of new flowers, I did it. I planted a flower garden. It’s not opulent, but it’s delightfully quaint.

And after much sweat and effort, I stood back and admired my little garden. But I felt supremely guilty that I’d found yet another hobby to distract me from the task at hand: becoming an author.

It’s in the midst of this that God and I hashed it out…into a little story.

Enjoy. The Spade and the Pen. 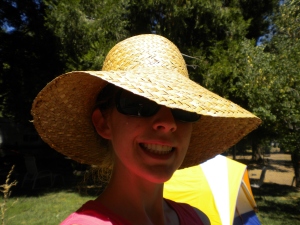 Check out my short story The Exhibit.

I wrote this over a year ago to enter a literary contest hosted by Bethel Church, Redding, CA, in conjunction with their spring writing conference. It truly was a wonderful journey, a reawakening of sorts. I had been dabbling with desires to write after a great hiatus of creative writing. It was something I always loved as a kid, but kind of lost sight of over the years.

Long story short, I had a desire to visit Bethel, and a desire to write. I had kind of christened my year “the year of discovering more about the kingdom of God”, and when I saw that the theme of the contest was in fact, “the kingdom”, I knew I was to write something. After chaperoning an elementary school field trip, the idea for The Exhibit kind of began to brew. It really was a great experience of learning how to write with the Holy Spirit, to wait on God for ideas and images, and simply write what He showed me. It began what has become a great journey of co-laboring with the Lord through the vehicle of writing. I pray it blesses you!